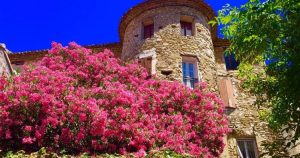 It is the main street of the village. In the old deeds, it was called “Under the mulberry trees” because there were ramparts of mulberry plantations outside the walls for the breeding of silkworms. At the beginning of the rue de pra-marri behind the café Léo Malemort had in the nineteenth century. a factory where silkworm cocoons were unwound. The street was also called Boulevard Victor Hugo, then Avenue de la République and now bears the name of Boulevard Félix Gras. At the beginning of the boulevard on the left in the direction of Méthamis you can see a sundial bearing a crescent moon or sun dated 1767, as well as a wrought iron sign. It is the « bouquet of Saint Eloi » indicating that the house was a farrier’s workshop, which has now disappeared. See in passing the birthplace Félix Gras 1844-1901, poet writer and felibrige. He is the author, among other works, of the novel “Les Rouges du Midi”. which refers to some historical events that happened in Malemort during the revolutionary period. A commemorative plaque placed on the wall in 1926 was replaced by the “Escandihado” association in 1958 after being damaged. Opposite the birthplace of Félix Gras was the first hotel of the elder branch of the Bonadonas. Dits d’Ambrun built in 1770. On the facade you can see a sundial « utima (f)orsan » = « the last can be ». On the same route, on the left, the only remaining tower in the ramparts and private dwelling called « castle ». It was also the dwelling of the Bonadona family then of Canon Michel Ignace d’Olivier, brother of Count Raymond d’Olivier, owner of Unang Castle.