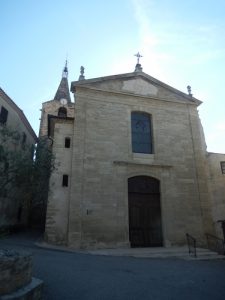 The Chapel of the Congregation of Girls

After having belonged to the Brotherhood of the White Pénitents, it was exchanged in 1767 to the Congregation of Girls. Various layouts led to the removal of the gallery which was above the street and leaning on the ramparts. Sold during the Revolution as a furniture depot, the chapel was reopened for worship in 1818 and refurbished in 1862, that is the date indicated above the main door. Worship was celebrated there until around 1930. Then, the chapel was used as a television room, a room for young people, and a meeting room for various local charities. It was also used as a sports hall for charities and for the school. It is now closed as it needs to be renovated.