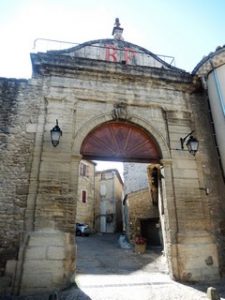 The great portal was the main entrance of the two access gates in the ramparts. The fortifications date from the 12th century,  indeed the door is already mentioned in the register of property of the diocese of Carpentras in 1239. The gate is also mentioned in the “ the red book of the Earls of Toulouse”. The fortifications were composed of 11 defensive towers ( with different names in order to recognize them.  named tower of “ the Bouc, the Sarreliers, Rampale, the Baudilis, the Choubpiers, the Bournonnets, the Gros becs, the Valadou, Aurrias or the Role, the Roussets, and the Ondra.)  The Towers were alternatively round or square within the ramparts. Against the portal on the left we can see that there was a square tower. The house on the right of the portal had a round tower. ( You can observe the rounding of the house which opens out on the Boulevard Félix Gras.) The original gate with a drawbridge was further  inside the ramparts and fortified by a ravelin, (which was in the shape of a half-moon). Everything was destroyed in 1761 and the new gate was rebuilt at its current location.