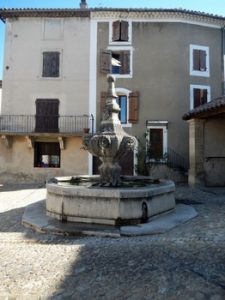 This fountain is now called, « Fountain of the Republic », after the development of this space in « Place of the Republic », also including the « gate of the Republic », main access in the ramparts of Malemort. The fountain, long called quite simply, « fountain of the place », because the only fountain for the inhabitants inside the ramparts, had before its restoration in 1685 « eight bars » of iron. It also had a trough where the animals could drink. The current fountain dated 1787 or 1789, adorned with six mascarons, from which each a flow pipe originates, was partly redone in 1983 by JL Morin, best sculptor in France in 1982 for stone cutting. A plane tree, planted as a « tree of freedom » between the fountain and the road was removed in 1970, its roots lifting and damaging the fountain.