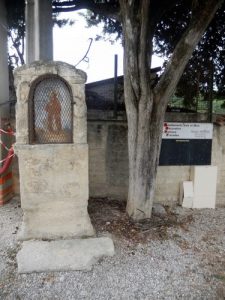 This oratory  represents Saint Roch and his dog Roquet. This Saint was prayed to fight some diseases ( such as the plague, the Spanish flu, And even the phylloxera). Saint Roch Was a pilgrim infected with the plague. Withdrawn in the woods, he was saved by a dog who brought him bread every day which he had stolen from his own master. The master, intrigued by these thefts, followed his dog, found Saint Roch  and cured him. Saint Roch is the patron saint of stone carvers  and carders.